Tango Intoxication may be purchased at Amazon.com​ 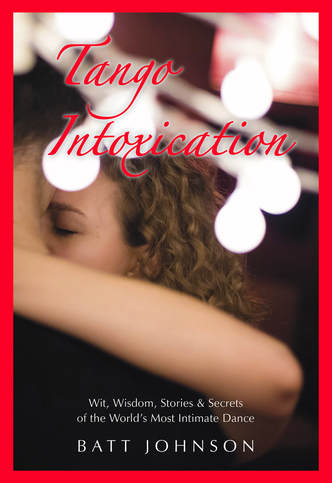 Batt Johnson is an Argentine tango dancer/choreographer and college professor. He has worked as a TV and milonga host, researcher, writer and producer on a world wide tango radio show called Espresso Tango Radio. For many years, he also worked as a communication consultant, award-winning actor, award-winning music radio broadcaster/producer and writer.

He wrote a monthly column for ReporTango Magazine and is the author of three published books on subjects ranging from acting and public speaking to jazz. He wrote the liner notes for many professional tango musician's CDs; a music writer and host for Only One New York, a weekly television show on PBS and was a national music video host and writer for MTV’s VH-1 Music Television.

He studied tango in both North and South America with some of the most influential and celebrated tango dancers and teachers of our time. Batt taught in dance schools and many outdoor events, directed, acted, wrote, co-wrote and danced in tango plays, tango films and has organized milongas.

Batt Johnson now teaches tango occasionally but considers himself to be a lifelong student of tango dance and tango music and tonight, Batt will go dancing.
​
Click to see other music writings by Batt (album liner notes)
Click to see Batt's awards
Click to see other books by Batt
Click to hear Batt's voice-over reel
NBA Lecture Video from the movie "The Youngest Guns"
If you really want to know...

​MORE ABOUT THE AUTHOR

​This is what I drew upon to write this book.

Batt Johnson has a deep passion for music and dancing. He grew up in a household where music was always playing. His two older sisters taught him to dance when he was very young.

He started dance studies many years later as an adult in 1997 and he has not stopped dancing and studying dance since. He studied in both North and South America with over one hundred and seventy of the most influential tango dancers, tango teachers and tango performers of our time including Osvaldo Zotto (RIP), Guillermina Quiroga, Gustavo Naveida, Julio Balmaceda, Carlos Gavito (RIP), Jorge Torres, Lorena Ermocida, Omar Vega (RIP) and many more.

He wrote the play "Tango Floor Gender Wars"; co-wrote and directed the play “Tango du Jour”; co-wrote, danced and acted in the play “Del Tingo Al Tango"; acted and danced in the film “The Challenger” with Silvina Valz which was part of the New York Tango and Film Festival; he was featured in the documentary film “New York Tango"; performed voice-overs for the stage show “Tango Connections” and for many professional tango teacher's instructional videos.

For several seasons he danced, hosted, acted, conceived and wrote for The Tango Zone Dance Company which performed in New York every summer for five years and at the Edmonton, Canada International Theatre Fringe Festival, the largest in all of North America.

Batt also created, produced and hosted female tango fashion shows and a benefit to raise money for tango dancing children who happen to be without sight.

He was chosen to be the Official Master of Ceremonies of the 7th USA Tango Championship Competition as part of the 13th Annual New York City Tango Festival.

Batt Johnson is an award-winning actor who has worked as a professional radio DJ, television broadcaster, college professor and communication consultant for business executives, lawyers, doctors, TV show hosts and professional athletes. As a media trainer some of his clients include the NBA (National Basketball Association), USTA (United States Tennis Association) and the United States Air Force.

Batt wrote the CD liner notes (the information inside a CD cover) for many professional tango musicians including Argentinian musicians Hector Del Curto, Fernando Otero, Gustavo Casenave (Uruguay) and Costa Rican bass player Rodrigo Saenz. He also wrote a monthly column for ReporTango Magazine, an international guide to Argentine tango. He is the author of three additional published books on subjects ranging from acting and public speaking to jazz. His other books to be published are a media training manual for professional athletes, a book of quotes for men and two books on Argentine tango.

Although Batt Johnson now teaches tango, he considers himself to be a lifelong student of the dance and tonight, Batt will go dancing.